You know how heavy I’m into fiber arts. Some of you are, too. I don’t know if you’ve tried spinning yet but you might be put back by the costs, want certain tools but can’t justify them.

Ok, here’s the warning. I’m an affiliate of Dreaming Robots. They make some small affordable electric wheels. I have 2 and a third one coming, along with their yarn counter…which is amazing. So yes, if you decide to buy through the affiliate link from this page, I will be paid.

If you aren’t fond of that kind of arrangements, it’s ok. But please go to their website anyway, check out their products, their prices and let me tell you, the service is even better than those. From here:  Dreaming Robots.

Ok, found the problem that was keeping the functions I need to use from working. For some reason, the forms platform decided to go tits up and block me from editing, adding, fixing, etc, etc,etc.

So…new form generator. Those things are working again. At the cost of anyone wanting to use the ‘contact us’ page having to identify all kinds of silly pictures for the ReCAPTCHA to make sure bad spam isn’t getting through.

Those of you who are already here and registered, have my home email so, if it’s important or something you don’t feel comfortable being public about, use that please.

The comment section is going to be testing some new options. I want your honest (really I do) opinion on them. If they work, they stay. If they don’t, my bit bucket isn’t quite full. Also any recommendations you’d like to make. I can’t promise they’ll happen but I’ll see what I can do.

I can’t test from here so I’d appreciate you looking for me.

From my tablet this looks BAAAAAAD. If you don’t see a graphic, it’s because I removed it and hopefully I’ll find a way to make the  tablet experience a little less shitty.

I got a nastygram from Facebook saying a comment I posted was removed for “inciting violence” and if it happened again, I’d get banned.

The post? “Off with his head”…Alice in Wonderland quote (almost). Ok, I admit this could have looked like it except for the graphic that was asking for a caption. Sort of like this: 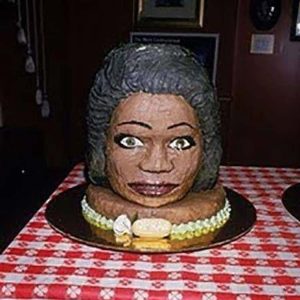 Except the head was definitely someone else (who was male) and not near as nice as this, sitting on a half-sheet cake. And it actually looked like the head might not really be cake itself. So the most obvious comment was “Off with his head”. I mean, really, do you want the next pictures, of something that was meant to be a tribute, to be those slicing into the head?

And if the head was styrofoam or other non-cake material, it would have to be removed anyway in order to cut the cake.

So FB clutched its pearls, had the vapors and reprimanded me in no uncertain terms.

For about 15 minutes, after which I got an apology and an “oh, we mis-understood, your comment has been returned”. You have to wonder about the discussion that turned that around.

“You morons did what? It’s a fucking CAKE and how do you eat a cake without cutting it? Not to mention that you didn’t recognize a quote from one of the most famous kid’s books in existence. A CAKE”

Or, at least I hope it went that way.